A Chistmas Trip To The City Of London - Part 3

So, the Saturday continues :)

My stroll along the south bank of the River Thames continued. Every so often a little surprise would reveal itself, like this piece of sculpture in the form of a surreal ship. This seemed the perfect place to stop for some refreshments. 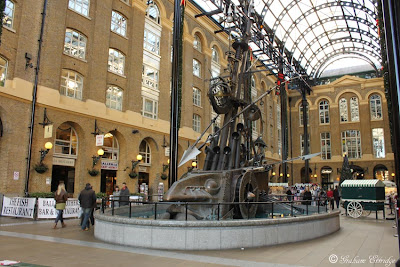 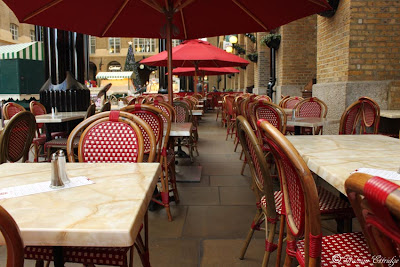 Another one of my favourite places to frequent along the south bank of the River Thames, is the book market situated under Waterloo bridge, outside the National Theatre. Hours can be lots just walking up and down, reading the backs of the books. Some old, some new, some rather obscure and some absolute classics. The internet may be alive but books will never fade away. There is something magical, almost romantic about reading a book, being whisked away to a different time or location, turning the pages with anticipation of what lays ahead. 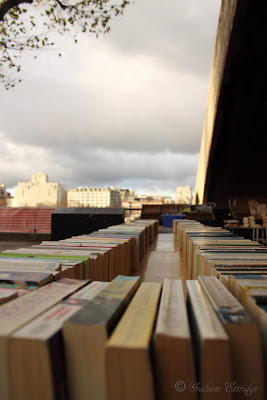 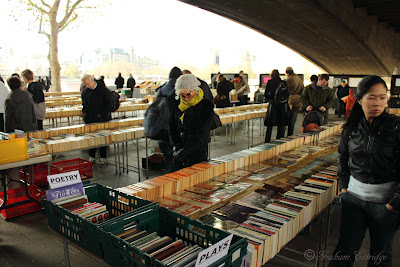 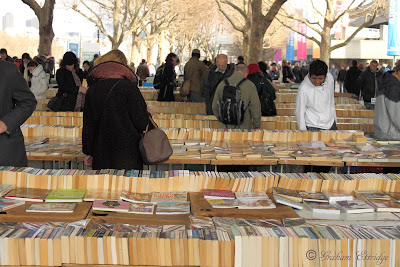 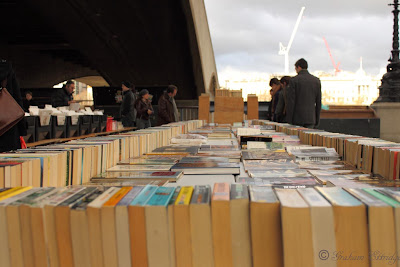 Just past the book market was another market with more sellers selling their wares. One stall that unsurprisingly caught my attention was the sweet stall, selling many varieties of sweets and candy. Can you recognise your favourite ones here? Mine are most definitely the coconut mushrooms Mmmmmmm yummy! 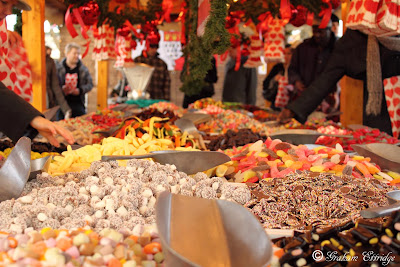 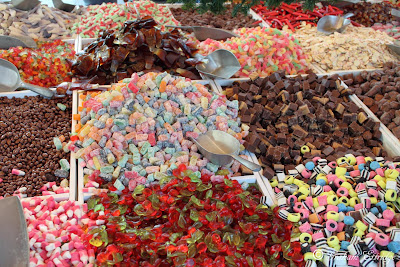 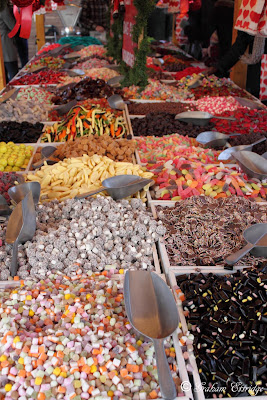 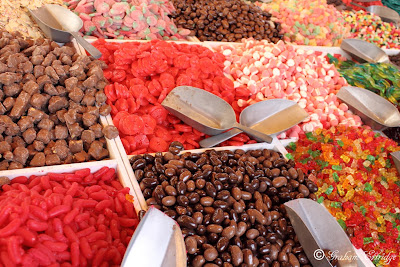 I made my way further along the bank, then catastrophe happened! The worst thing that could EVER happen to a photographer! An event that is worse than you could even remotely comprehend.....

...the battery ran out on my camera, and I had stupidly left my spares ones on charge in my room, which was still miles away!!! Ggggrrrrrrrr!!!!!!!!!!! I managed to capture one more shot before I had to pack my camera away and head back to Covent Garden. This shot was taken on the approach to Westminster Bridge. On the other side of the river, the Houses of Parliament are clearly visible on the skyline as is the clock tower of Big Ben. Unfortunately, the photograph is quite poor quality. I didn't really have the time to get the settings right before the battery shut down. 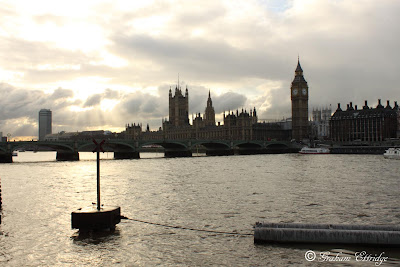 Muttering absurdities from under my breath, I wandered over Westminster bridge as the sun set and made my way back to my room to get my batteries. I then took the opportunity to grab a bite to eat in Covent Garden before going to capture some more photograph opportunities.

There is a quaint outdoors Italian bistro on the edge of Covent Garden that serves the most scrumptious Spaghetti Carbonara. So I sat myself down on an available chair and placed my order. The next hours was spent watching the world go past whilst warming myself underneath an outdoors heater. 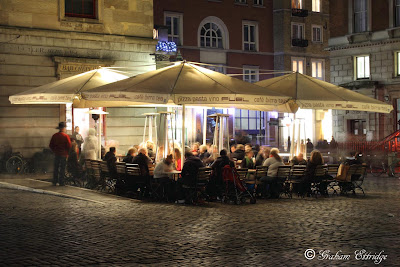 After refuelling and warming up, I wandered around the outside of the grand Covent Garden marketplace and captured a few more shots. It is just so frustrating that I cannot show you the sounds, aromas and energy that floated through the air on that cold and crisp evening.

In the top left hand corner of the first photograph, you can probably make out the balcony of the Punch & Judy pub, which has to be my favourite location of the whole of London. Many a glass of champagne or red wine has passed through my lips on that balcony... Hiccup! 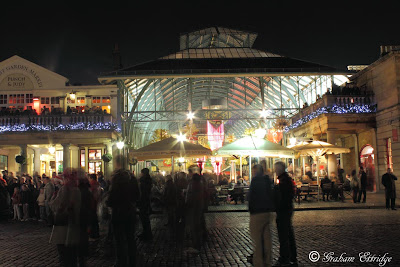 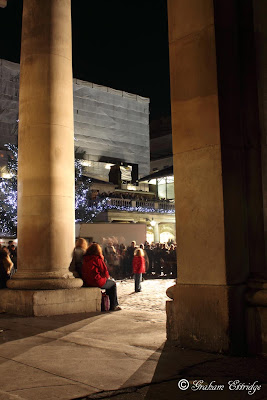 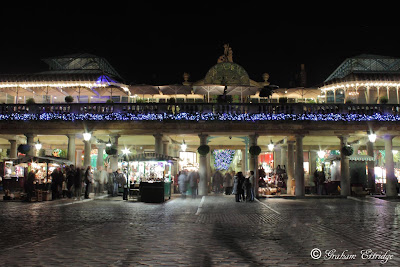 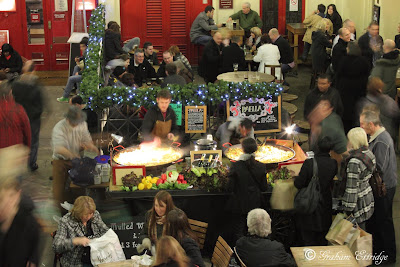 So, my night time journey begins. My first stop is the fountains of Trafalgar Square. Many times over the past few years I have unsuccessfully tried to photograph these at night.

With its position in the heart of London, Trafalgar Square is a tourist attraction; and one of the most famous squares in the United Kingdom. At its centre is Nelson's Column, which is guarded by four lion statues at its base. Statues and sculptures are on display in the square, including a fourth plinth displaying changing pieces of contemporary art, and it is a site of political demonstrations.

The name commemorates the Battle of Trafalgar (1805), a British naval victory of the Napoleonic Wars. 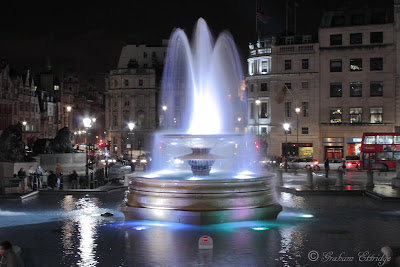 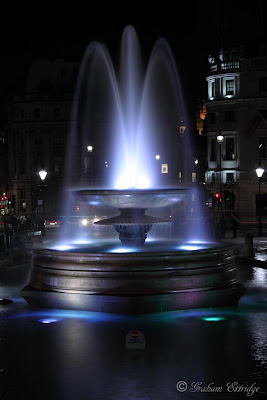 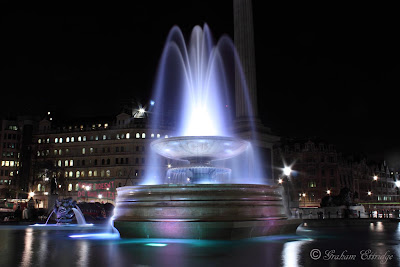 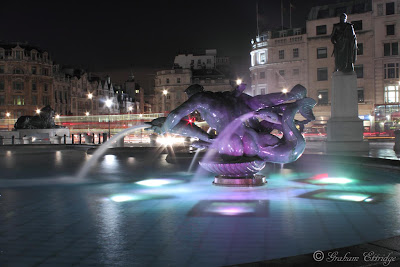 My wanderings do continue further into the night. But in fear of boring you all too much in this post. I will save that and more for my next post.

Come back soon, for more of my adventures in London at Christmas.

A lot of pictures I like in this series. You found interesting angles! One stands out, the first one of the book series. One of my favorite!

Books! I love books and yeah, I agree with you about the wonders books can do to us. :-)

Opps, the batteries spelled for more exercise, I think! Haha, at least you had to do the walking all the way back to your room.

I love to look at all the pictures. Oh yes, did you eat the 'Paella'? It's interesting to see them cooking. Wonder how it tastes now hihi...

Everything and especially the pictures are just amazing, like in a tale. I think that you are a very good photograpfer, bacause you succeed in catching the atmoshere of the city in Christmas. You've turned the "cold" London into the warmest place in the world

You've captured a romantic side of our capital city that I never knew existed and definitely going to have check out that book stall!

Zhu, that book market is so addictive. I wander around it every time I go to London. I am glad you liked the photograph. I received some strange looks when I was on my knees taking it...lol!

Crystal, yes I did eat the Paella. It was scrumptious!

Pam, thank you so much. That was a really kind comment. I am glad I was able to capture a little bit of the atmosphere and show it to my readers, and am really glad that you enjoyed it.

Janette, London really is romantic. When the sun goes down and the city lights turn on, it transforms into a whole different world.

Aiden, thank you very much for your kind feedback. I am glad the information is helpful :) 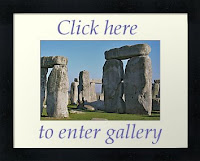